To share your memory on the wall of Leonard Singer, sign in using one of the following options:

To send flowers to the family or plant a tree in memory of Leonard Singer, please visit our Heartfelt Sympathies Store.

Receive notifications about information and event scheduling for Leonard

We encourage you to share your most beloved memories of Leonard here, so that the family and other loved ones can always see it. You can upload cherished photographs, or share your favorite stories, and can even comment on those shared by others.

Posted Dec 05, 2020 at 11:06am
Leonard Singer passed away on April 20, 2020 at the age of 93 due to Covid-19 at Oceanside Care Center where he moved to in December, 2019. He was born in Brooklyn, NY on April 20, 1927, a fact that was discovered recently since his birthday had always been celebrated on April 21st. He grew up on Pitkin Avenue in Brownsville, son of the late William and Ida Singer and loving youngest brother of late siblings, Sam, Harry and Molly and niece Sondra. Joining the Army in 1946, he served through August, 1947, working as a Rifleman and receiving the Army of Occupation Medal and World War II Victory Medal. His Postal career began in 1947, working in the Midwood Post Office on Coney Island Avenue until his retirement 40 years later. He worked various jobs after retiring, including some messenger jobs and other office positions. Meeting beautiful Florence Katz on Brighton Beach led to marriage in 1956 which lasted 61 1/2 years until Florence sadly passed away on July 9, 2018. They enjoyed living 1 ½ years at the Executive Towers in Long Beach, moving from Brooklyn to be closer to family. Leonard always enjoyed long walks, faithfully running errands on Kings Highway and later basking in the sun on the boardwalk in Long Beach. He never missed a day reading the NY Post, even after he moved to The Bristal of Lynbrook in August, 2018 where he also spent time listening to music, playing cards, watching many old movies and even playing a little pool. He collected stamps and also collected coins as well. He loved spending time with family most of all and always helped out around the house for as long as he was able to. Leonard totally enjoyed watching sports, whether baseball, football or even basketball as well as any news broadcast. He was a devoted and loving husband, father, grandfather and great-grandfather who is survived by his daughters, Beth Hertz and her husband Michael and Susan Santini and her husband Barry, both residing in Oceanside, NY; grandchildren, Stacey Cohen and her husband Scott and Jennifer Hertz and her fiance Justin, Neil Cooperman and Alyssa Cooperman and great grandchildren Layla Cooperman and Jessica Jimenez. A private funeral service and interment took place at Beth Moses Cemetery in Farmingdale, NY on April 23, 2020 at 2:30, officiated by Rabbi Uri Goren.
Comment Share
Share via: 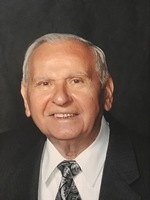